Pebble Beach, CA Financial Mishaps Can Be Signs Of Dementia And Alzheimer’s Disease

I wrote previously on my blog about the Alzheimer’s Association’s list of “Causes and Risk Factors For Alzheimer’s Disease” and I saw a follow up article the New York Times posted today stating that financial mistakes may be an indication of dementia.  This may seem like a no-brainer, but if you have a relative who is in charge of a large amount of money who has early-onset dementia, this could be very dangerous.  In fact, they could lose everything.  The article did a deep dive into Maria Turner, who saw a red pick up truck she liked on eBay, clicked on a button and spent $20,000.  The next morning she woke up having no recollection of having bought the truck.  The experience scared Maria, a critical care nurse.  “I made a joke out of it, but it really disturbed me,” she told the NYT.  Six years later, at the age of only 53, she had to see a doctor after she had binged on everything from garden gnomes to shoes.  Doctors told her that imaging of her brain showed all of the hallmarks of chronic traumatic encephalopathy, a degenerative disease.  It could have been caused by injuries in her youth falling from horses, but doctors said there was evidence she was developing Alzheimer’s disease and frontal lobe dementia.  This is a sad story, but not a new one. Regular readers of my blog know that both my father and grandmother had this terrible disease when they passed away.  There are wonderful people at our local chapter of Alzheimer’s Association in Ryan’s Ranch.  They also have a 24-hour hotline if you need support at 800-272-3900.

Give The Gift Of A College Education To Your Grandchildren, And Do It Tax Free 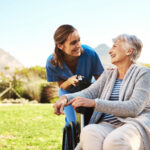