There has been such slow progress on the search for a cure for Alzheimer’s disease, I was pleased to see that some researchers are focusing on finding early clues as to who may be vulnerable to getting Alzheimer’s disease or some other type of dementia.  A recent article in The New York Times said that some scientists believe that pathologies underlying brain decline may begin many years before symptoms emerge.  A spate of experiments is underway to see if little things like overlooking a couple of credit card payments or habitually braking while driving could be a sign that dementia is in your future.  “Early detection is key for intervention, at the stage when that would be most effective,” said Saye Bayat, the lead author of a driving study funded by the National Institutes of Health and performed at Washington University.  The study took 64 older adults with preclinical Alzheimer’s disease as determined by spinal taps and 75 who were deemed cognitively normal (results were not shared with the study participants).  For a year, researchers measured both groups’ driving performance.  The study found that driving behavior and age could predict preclinical Alzheimer’s 88% of the time.  Those findings could spur recruitment for clinical trials and allow for interventions—like an alert when a car drifts—to help keep drivers safely on the road.  Dr. Jason Karlawish, a geriatrician and co-director of the Penn Memory Center, called the study “provocative” and well designed.  “The results suggest that monitoring a real-world, cognitively intense behavior can detect the earliest, subtle signs of emerging cognitive impairment,” he said.  Another study analyzed medical records and consumer credit reports for more than 80,000 Medicare beneficiaries and found that those who eventually received a diagnosis of Alzheimer’s disease were significantly more likely to have delinquent credit card payments (and sub-prime credit scores) than those with similar demographics who never received an Alzheimer’s diagnosis.  I hope these studies bear fruit.  Regular readers of my blog know that both my father and grandmother had this terrible disease when they passed away.  There are wonderful people at our local chapter of Alzheimer’s Association in Ryan’s Ranch.  It is always a struggle figuring out how to deal with a loved one, as the symptoms can seem to change from day to day.  Drop by or give them a call if you need help.  And when all else fails, don’t forget that the Alzheimer’s Association has a 24-hour hotline.  If you need some additional support you can reach them at 800-272-3900. 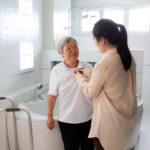 Pacific Grove, CA Exercise Is Critical For Those With Early Onset Alzheimer’s

Santa Cruz, CA Caregivers Looking For Relief For Clients With Arthritis Or Osteoporosis Might Want To Turn To Vibration Therapy Or Light Therapy